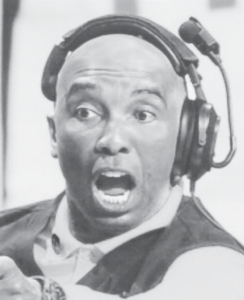 Darren  Arbet  is  the  most  successful “home grown” professional coach in Stockton’s sports history. Born and raised in Stockton, Darren graduated from Edison High School and Sacramento State University. At Edison, Darren was a standout in football  and  track &  field.  He  was twice

selected All-League as a defensive end while at Sacramento State.

He played professionally for the Los Angeles Cobras (1988) and the Maryland Commandos (1989) of the Arena Football League.

In 2002, Darren became the first African-American head coach to win a pro football championship in North America when he coached the Sabercats to a victory in Arena Bowl

XVI. Also in 2002, he was inducted into the African American Athletic Hall of Fame in  Stockton.

He was selected to the Arena Football Hall of Fame in 2011.

In the fall of 2016, Darren is serving as the Assistant Head Coach responsible for the linebackers and special teams at Humboldt State University in Arcata, California.

Darren and his wife, Stephanie, have two sons, Lamarr and Dominik.