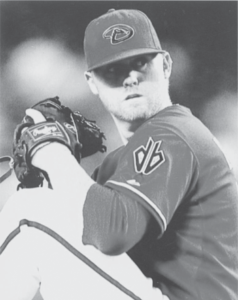 Barry  Enright  was  born  in  Stockton in 1986,  attending Brookside  and  Claudia Lundeen Elementary Schools and graduat ing from St. Mary’s High School in 2004. Barry played baseball at St. Mary’s, where he twice was named All-League, first team All-State in 2004,  twice  named the SJAA Most Valuable, and three times as St. Mary’s Most Valuable Player.

He was also an All-SJAA and All-San Joaquin County Football Team selection as quarterback in 2003 and 2004. He was selected first team All-State in football his senior year, throwing for 2,572 yards and 27 touchdowns, with only three interceptions, while leading the Rams to a 13-2 record. He was St. Mary’s Athlete of the Year three times.

Barry accepted a scholarship at Pepperdine University. As a pitcher, he won his first 17 decisions against WCC opponents while earning Freshman All-American and WCC Freshman of the Year  in 2005. As a sophomore he was selected All-WCC and as a junior to the third team All-American Team. As a junior he led the WCC in wins, ERA, innings pitched, and starts. He issued fewer than two walks in all 18  starts. He was a finalist for  the Roger Clemons Award, the Dick Howser Trophy, and the Golden Spikes Award. His  Pepperdine career record was 35-8, which is second best in Pepperdine history and tied  for fourth in the history of the West Coast Conference.

In 2007 Barry was drafted by the Arizona Diamondbacks. His first 15 innings were shutout innings in the minor leagues. In the 2010 season, he was with the Double A Mobile Bay Bears, going 4-1 with a 2.88 ERA in 14 starts before getting the call he had been waiting for his whole life. In 2010 he became just the 12th pitcher in Diamondbacks history to win his major league debut, beating Albert Pujols and the St. Louis Cardinals 4-2 with 38,000 fans watching at Busch Stadium. He won six of his first eight major league starts with a 2.45 ERA. On August 29, 2010, he pitched seven shutout innings against the San Francisco Giants to beat two-time Cy Young winner Tim Lincecum 6-0. He finished with a 6-7 record and a 3.91 earned run average in 99 innings his first big league season. In 2012, Barry was traded to the Los Angeles Angels. Following that season, he signed minor league contracts with the Philadelphia Phillies and the Los Angeles Dodgers. He also played in the Mexican League and in 2017 signed  a minor league contract with the San Diego Padres and was traded to the Colorado Rockies before again signing with the Arizona Diamondbacks.

Barry announced his retirement from professional baseball in 2019 and is working as a pitching coach in the Diamondbacks minor league system. He played 12 seasons of professional baseball, with a record of 109 wins, 90 losses, and a 4.5 overall earned run average. He started 306 games, struck out 1200, while walking only 477.

In the off season, Barry loves to play golf and spend time catching up with family and friends. Barry now lives in Arizona.