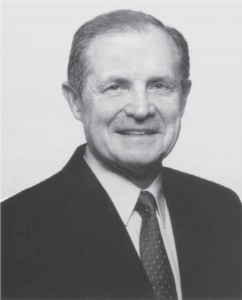 UNIVERSITY OF THE PACFIC AND OLYMPIC VOLLEYBALL COACH

Terry was born in Germany and attended school in Chicago.

His first coaching job was at Ohio State (1947-76), where he coached the men’s volleyball team to two consecutive 3rd place NCAA finishes. He was the league Coach of the Year in both his first and second seasons. In 1975 he was named the assistant coach of the U.S. Women’s team in the Pan-American Games.

In 1976 he came to UOP to coach women’s volleyball and immediately raised the level of play to national prominence. In 1979 and 1980 his teams placed fourth and second in the national tournament known as the AIAW. From 1981 through 1984 they finished 4th, 5th, 4th, and 3rd in the NCAA tournament. His overall record at Pacific in nine seasons was 267-85-2, and in league, 64-3 (NCAC-3 years, NorPac-2 years, and PCAA-1 year). He was selected by his fellow league coaches as Coach of the Year five times while at

Pacific. During his time at Pacific, seven different players were selected as First Team All-Americans. Three of his players were on the USA National Team. Jayne Gibson-Mchugh, Eileen Dempster, and Terry McGrath. In 1983 he was named the NCAA National Coach of the Year. He coached international teams in the off-seasons as opportunities presented themselves.

In 1985 he left Pacific to become the USA Women’s National Volleyball Team coach for 12 years. His teams won the Bronze Medal in 1992 and finished 7th in the Olympic Games twice. In 1995 his team finished first in the Grand Prix World Cup with a 57-16 record. He has won numerous national and international awards for his coaching. In 1995 he was named Women’s International Coach of the Year. During his tenure he posted over 300 international victories.

From 1975 to the present, Terry has been a nationally and internationally recognized volleyball clinician, having administered and spoken at over 300 national and international clinics in the last 25 years. During this same period he has been an author, co-author, and presenter of many articles, research papers, and learned society meeting presentations. He has written several books related to volleyball skills and strategy development.

He is a motivational speaker, clinician, and presenter, while serving as a consultant to many leagues and schools in volleyball and sports psychology. He has traveled throughout the world more than 80 times to over 20 countries, promoting the sport of volleyball.

Terry returned to college coaching in 2005 at Oregon State leading the Beavers to a school record 125 wins and an NCAA Tournament appearance advancing to the Sweet Sixteen in 2014. He was named the Pac-12 Coach of the Year in 2014. He retired following the 2015 season after eleven years at Oregon State.

Terry is the co-founder, President/CEO of the Art of Coaching Volleyball Clinic Series.

He is also the CEO/President of Total Sports, LLC, a marketing and consulting company.

Terry was inducted into the University of the Pacific Athletic Hall of Fame in 1992. Terry resides in Leucadia (Encinitas), California, with his wife, Nancy.