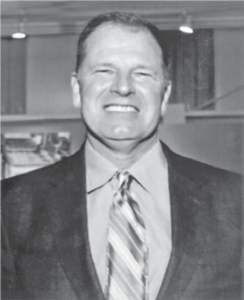 Laurence then attended St. Mary’s High School from 1975-1979. His remarkable performance as a member of the St. Mary’s basketball team earned him many awards.

He was named to First Team All valley Oak League in 1978. He was also selected as the Sac-Joaquin Section Most Valuable Player, All-Northern California, and to the Record’s All-Area team in 1978. In 1978-79, his senior season, he led his team to a 29-5 record overall and 12-2 in the San Joaquin Athletic Association. He scored 17.9 points per game for the 34-game season, including 31 points in St. Mary’s season-ending loss 70-72 to Crenshaw High School at the State Tournament. In 1979 he was named to the Northern California team.

After high school graduation, Laurence signed with the University of the Pacific, where he played for coaches Tom O’Neill and Dick Fichtner. After the 1979-80 season, Laurence was named to the All-P.C.A.A. Freshman 1st Team. Laurence was named co-captain in his senior year and was the team’s Most Valuable Player. He was selected to the P.C.A.A. Second Team All-League in 1982. Laurence was noted for his leadership, hustle, and aggressive defense throughout his college career.

After graduating from Pacific, Laurence was granted a tryout with the Gold State Warriors in 1985.

Laurence played in the Continental professional league with Cincinnati before playing professionally in Europe. In Europe he played for the Portsmouth Club in England in 1986, averaging 15.0 points and 7 rebounds. He played in Holland (1987) and Australia (1988). In Australia, Laurence averaged 22 points and 12 rebounds for the Burdekin team in the Queensland League.

Laurence resides in Stockton with his wife. They have two children.