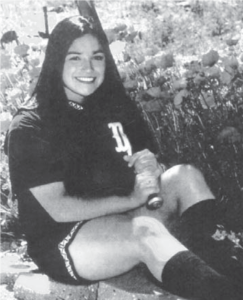 Arica Arucan, a Stockton native, attended St. Mary’s High School, San Joaquin Delta College, and University of California at Santa Barbara. Arica started playing softball competitively at the age of nine. She spent the majority of her softball career playing for the Running Rebels, with whom she competed in several national tournaments. She also traveled internationally to compete in Japan.

While attending St. Mary’s, she was selected four times as the Most Valuable Player for her team. She was also named All-League four times (1995-1999) and All-Area three times. In 1997 and 1999, Cal-Hi Sports named her to the small schools All-State team. In 1999, a season in which she was co-MVP of her league, she was also chosen as the Stockton Record’s Softball Player of the Year.

After graduating from St. Mary’s, she attended San Joaquin Delta College. As a freshman in 2000-01 she made All-Conference and All Nor-Cal team. She struck out 173 batters in 160 innings and batted .328. As a sophomore she was named Northern California Pitcher of the Year. Her season-long earned run average was 0.43, the lowest in Norther California, and she struck out 200 batters in 130 innings.

In 2001 she was selected by the Stockton Athletic Hall of Fame as an Athlete of the Month. She received a full athletic scholarship after that season to play softball at University of California at Santa Barbara. After her first semester she decided to concentrate on academics and transferred to Cal State Sacramento, where she earned her BA in Psychology. Arica earned her Masters Degree in Social Work at Cal State Stanislaus and is currently a licensed clinical social worker. She then went to work at United Sports Academy as a pitching coach.

Sports helped instill in Arica several different qualities that contributed to her becoming a successful member of the community. She credits being a student-athlete with teaching her the importance of team work, respect, trustworthiness, citizenship, leadership, and responsibility. Arica credits her parents and coaches for her success with their supportive, understanding, and encouraging mentoring both as a student athlete while also insuring that she excelled academically. Participation in athletics encouraged her to set personal goals for herself, both on and off the playing field and helped her build her self-confidence.

Arica continues to reside in the area with her two daughters. She was inducted into the Stockton Mexican Athletic Hall of Fame in 2013.